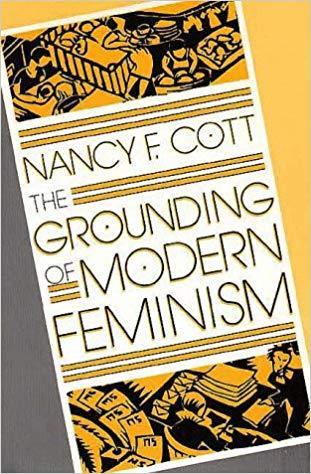 The comments below reflect a (lightly edited) talk I gave in October 2017 at a conference to honor the retirement of Nancy Cott, who had advised me as an undergraduate and greatly shaped my career as a historian.

... I am delighted to see Stephen Lassonde here, because it was in his junior history seminar that I first read Nancy's book, The Grounding of Modern Feminism, which then inspired me to ask Nancy to advise my senior essay, the following year, on the role of Jewish women in the American birth control movement. It was his class, together with the late Paula Hyman's class on Women and Judaism, and Jon Butler's class on modern religion, that inspired me to pursue a graduate degree in history. Both Nancy and Paula were powerful—if sometimes daunting—role models for academic success.

Years later, while I was living in Washington Heights, not far from the Cloisters, and finishing my dissertation, I was invited to a women's group hosted by my yoga teacher. We were each asked to bring a book that was important to us. I brought The Grounding of Modern Feminism. We went around the circle and each person described why she had chosen her particular book. I spoke about how the book's emphasis on ideas—and on feminism as a driving force in modern American history—was a source of inspiration to me in my life and career. The evening went downhill from there, as the host then asked each of us to name our inner goddess. As one by one the other women began to name their inner goddesses, I racked my brain for what I might say. I began to panic and wondered if I should just say, "I had one…but I killed her." Ultimately, I told them that I didn't have an inner goddess. There was silence. All of which is to say, my choice of The Grounding of Modern Feminism turned out to be unexpectedly relevant about the danger of assuming a universal sisterhood.

Nancy's scholarship has shaped my own in obvious ways, and it is a pleasant challenge to think now about how it has influenced my investment in queer scholarship. My first book, a history of marriage counseling and guidance, offered a history of the construction and contestation of heterosexuality, in the domains of social science, religion, and public policy. Nancy's book Public Vows, published just as I started graduate school in 2000, illustrated how marriage served as a legitimating institution for heteronormative and gendered divisions of labor and legal discrimination. Fundamentally, Public Vows highlighted heterosexuality as a historical construct. It reminded me that marital ideals often provide the recipes for a culture's normative gender and sexual roles, and that by looking more closely at marriage's history, we might reveal how gender is constituted and how intimate sexual desires, as well as the desire to control those desires, shape community values and even national debates.

But beyond the topics of her books, it is Nancy's method that has mattered for those of us who work in queer and LGBT history. She has modeled an archival stubbornness, an insistence that the stories we seek to tell are there if we will but look hard enough or read creatively enough for them. She trained a generation of historians to be relentless researchers, adept at reading against the grain of the archive. She taught us never to pass by a rich documentary source, to save those files for another project. (I will never forget her story about how her now-canonical article about divorce in early national Massachusetts was an accidental outcome, like a third child, that nevertheless becomes a much beloved companion, while she was busy raising her book-length progeny, The Bonds of Womanhood. It was a story that flashed through my mind when I was at Syracuse University, ostensibly to look in the papers of Norman Vincent Peale for evidence of the marriage guidance he offered at his religious-psychiatric clinic, and instead found a file of letters in response to his advice to a young gay man about "becoming normal." Those files became the basis for a chapter in an edited collection about American Christianity, and constituted my first direct foray into LGBT history.)

The premise of this collection is that the history of heterosexuality offers a vast expanse of unexplored assumptions that merit rigorous historical inquiry. Each of the essays in this volume examines the history of heterosexuality from a different angle of vision. Spanning centuries, racial/ethnic groups, geographies, and subcultures, the essays illuminate the varieties of heterosexuality in North America. We are fortunate to have essays by Richard Godbeer, Sharon Block, Rashauna Johnson, Judy Wu, Nick Syrett, Andrea Friedman, Renee Romano, Pablo Mitchell, Marc Stein, Serena Mayeri, and several others. Together these essays explain how differently earlier Americans understood the varieties of gender and different-sex sexuality, how heterosexuality emerged as a dominant way of describing gender, and how openly many people acknowledged and addressed heterosexuality's fragility.

The effect on queer scholarship works in another way, though, too: that our personal academic genealogies are not necessarily natal or nuclear, not always matrilineal or patrilineal, but multigenerational, adoptive, and improvised. Nancy's imprint on our respective fields arises not just from her work, but from the scholarship of her students. As I began to understand myself as a historian of gender, sexuality, and religion, I realized that my shelves were filled with books not only by Nancy, but by her students, works that testify to the queer possibilities of traditional archives. This has become one of the questions taken up by her graduate students: How can we locate histories of sexuality where they haven't been marked as such. I will cite just three examples here.

Perhaps the most direct inspiration for my current project on the history of heterosexuality comes from the George Chauncey's book Gay New York, in ways he put the construction of heterosexuality in conversation with construction of homosexuality, not in the abstract, but demonstrated through meticulous archival research. His insights about the co-constitution of these norms has inspired much of my subsequent curiosity about queering the history of heterosexuality. And I don't think there is one of us who has read his bibliographic essay without admiration for the kind of archival work required to excavate the book's many insights.

One of the most important influences on my work has been the work of Regina Kunzel. Her first book, Fallen Women, Problem Girls, which began as a dissertation under Nancy's direction, examined the history of the maternity home movement and social workers and evangelical reformers, and the young unmarried mothers who became the focus of their attentions. The book offers a model of how to read against the archive and rescue the voices of individuals otherwise omitted. Reg's discovery of young mothers' sexual and interpersonal agency became a transformative example for so many of us who have subsequently used social work records as a way to uncover queer subjectivities rarely articulated overtly in the archive. This nuanced understanding of the gendered and raced operation of expertise appears on every page of her magnificent second book, Criminal Intimacy. The book's brilliant excavation of sexual desires—and ideas about sexual desires—within mid-20th-century American women's prisons reveals the newness of medicalized ideas of sexual identity, the racial construction of sexual norms, and the failure of hegemonic discourses to define social experience.

I learned, too, from Jane Kamensky's elegant first book, Governing the Tongue, another Yale dissertation with Nancy on the committee, about the audacity of speech as a window onto gendered norms and sexualized fears. In a book devoted to "thick description of New England's economy of speaking in the seventeenth century," Jane reveals the sexual politics of speech. To cite just one example, she explains that seventeenth-century New England women accused of witchcraft marshaled explanations of "demonic ventriloquy," the gendered norms of female passivity combining with fears of women's power to offer the accused a way to attribute the utterances of their own mouths to nefarious external forces. Though far outside the period I study, this book reminds me that speech acts (and not simply "discourse") can help us decode the sexual and gendered norms within quite specific historical contexts.

The archive's silences challenge so many of us who look at queer/lgbt topics. I have learned from Nancy—and from her students—to put a megaphone up to the archive so our subjects' voices ring out clearly. Rather than bemoan our subjects' exclusion, we dig further, read more incisively, and write in ways that honor the subjectivity of people who otherwise disappear from the historical record. It's an approach that is not just methodological but also dispositional, an archival optimism that insists that we can—we must—possess the means to recover obscured experiences and silenced voices from the limitations of the traditional archive.

Finally, I want to note the importance of Nancy's legacy of activism, particularly with groups like the Women Faculty Forum at Yale. Soon after I arrived at my job 10 years ago, I became the first member of my department to take parental leave—not the first to give birth, but the first to take leave, because the department chair had never bothered to tell faculty about the benefits to which they were entitled. Knowing how hard Nancy, Paula, and others had fought for women faculty before me perhaps inspired me to do a little more research. When the time came, I met with my department chair, handed him a printed copy of the leave policy, and told him that "given that this is what the policy stated," I would take my leave in the fall. He said, "Mkay!" Nancy's activism cleared a path for the rest of us to go down—not because the issue is settled, but because we must maintain that path, keep it cleared of obstacles, and ensure that it reaches farther and farther with each generation of scholars.