Of Pants, God, and Politics 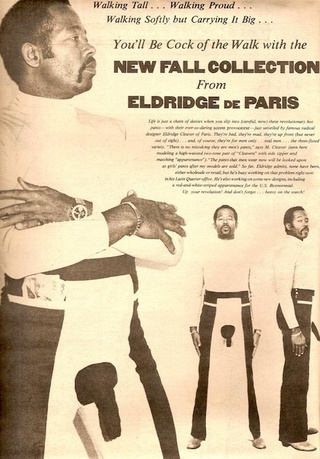 Advertisement for The Cleavers in Rolling Stone magazine, 1975.

Whether reporters called them "virility trousers" or joked that the man wearing them would be the "cock of the walk," the pants--known as The Cleavers--caught the attention of American reporters fascinated by the sartorial adventures of one of the most electric and controversial intellectuals of the radical left. They were designed and worn by Eldridge Cleaver, the Black Panthers' former Minister of Information. At some point in 1975 (and I'm still waiting to dig through archives from Texas A&M to figure out precisely when) Cleaver decided to add fashion design to his impressive resume. The Cleavers made a lot of people laugh, but Eldridge thought they were essential for men to regain their masculinity and avoid becoming "unisex."

Born in the mid-1940s in Arkansas, Cleaver had spent much of his youth and young adulthood in California behind bars, but he seems to have spent a great deal of his time there reading, thinking, and writing. After his release from Soledad prison in 1966 he had become a darling of the West Coast intellectual left. His first book, Soul on Ice, was a set of essays that combined memoir and manifesto about black masculinity, sex-based theories of class and race, the brilliance of Malcolm X, and the dangers of black men's emasculation (including an infamously cruel portrait of writer James Baldwin, who was gay); it sold tens of thousands of copies. He joined the Black Panther Party based in Oakland in 1967 after seeing Huey Newton, one of the group's founders, stand up to San Francisco police officers. By the time Cleaver found himself trapped in a basement with teenager Bobbie Hutton on April 6, 1968, confronting a barrage of bullets and tear gas, he had become one of the most visible and influential forces in the group's rise to national prominence as a voice for black liberation. Cleaver went back to jail for violating his parole, was released when a judge threw out the parole violation, but faced another hearing in late November 1968, when he slipped out of the country, traveled to Canada, and made his way to Cuba for asylum. After a couple of years among other political exiles in Algiers, during which time his wife Kathleen (Neal) Cleaver bore two children, Cleaver and his family moved to France.

It was in France that Cleaver had the epiphanies that would change the course of his life. In an order I've yet to nail down, he (1) became a Christian, (2) designed his eponymous pants, and (3) rejected left politics.

His story is on the one hand evocative of many of the stories of religious conversion I've learned about for my new book. Many of these people found a new faith while in the midst of a series of life changes. In the way he combined spiritual, political, and gendered/sexual transformations, Cleaver reminds me of Whittaker Chambers. A former spy (and key witness at the 1948-1949 espionage trial of State Department employee Alger Hiss), Chambers found God as he was leaving the Soviet underground in 1938, and he further associated his conversion with his rejection of his homosexuality.

Cleaver was also akin to the many members of the 1960s Left who joined the conservative political movement (and in Cleaver's case, also associated with the New Christian Right) in the 1970s.

Yet in so many other ways, Cleaver is an original.

He designed the pants, he said, to free the male sex organs from their uncomfortable "fig leaf" concealment within traditional men's trousers. The fact that men and women now wore similarly styled pants seemed to irk him. As he told a reporter for Jet magazine, "These pants will give men a chance to assert their masculinity. How can clothing shops sell trousers to girls and expect men to buy girls [sic] pants?" He offered two designs: one, as pictured above, was a form-fitting sheath for the penis, with a small sack below for the scrotum. Another version had what is best described as a codpiece, a single pouch that rested outside the rest of the trouser front. Cleaver prefered a contrasting fabric color for the codpiece or sheath; making the male sex organs obviously visible was his point.

In 1975, after seeing the face of Jesus Christ in the moon from his apartment in the south of France, Eldridge told Kathleen that he was ready to turn himself in and return to the United States to face the legal consequences. And he also told her that he planned to wear the new pants when he did so.

That November, accompanied by two FBI agents, Cleaver flew to New York where he was taken into custody, then flown to San Diego and on to the Alameda County Jail to await trial. Kathleen and Eldridge's lawyers talked him out of wearing The Cleavers.

In an opinion piece published in the New York Times on November 19, Cleaver announced that he was returning because the United States was "the freest and most democratic" nation in the world. With Nixon's resignation and with the Senate's Church Committee revealing the extent of the FBI's efforts to undermine the Black Panthers and other radical groups, Cleaver believed he stood a chance of justice in a nation he once vowed to destroy and rebuild from scratch.

Over the next few years Cleaver's conversion became well known. A network of wealthy Protestant evangelicals posted bail and supported his defense fund to get the charges against him dropped. (The leadership of the defense fund included civil rights lion Bayard Rustin and civil rights / feminist champion Eleanor Holmes Norton.) He teamed up with former Nixon aide and ex-convict Charles Colson (whose 1976 book Born Again had become a bestseller), founded the Eldridge Cleaver Crusades, spoke at churches and on college campuses around the country, and wrote Soul on Fire, his follow up memoir, to recast his prior experiences as foreshadowing his ultimate rebirth in Christ. The book made no mention of The Cleavers, but into the late 1970s he operated a small factory to produce the pants, which sold for about $40 a pair at a West Hollywood store.

Cleaver meanwhile testified to his religious conversion and political transformation in numerous appearances on secular television shows like Donahue (where Susan Brownmiller demanded he apologize for his defense of political rape in Soul on Ice) and Tom Snyder's Tomorrow, but he was even more often present on the Christian Broadcasting Network, on Jim and Tammy Bakker's P.T.L. Club, George Otis's High Adventure Ministries, and the Old Time Gospel Hour. He shared his conversion story to Christian institutions like Biola University. Viewers of these secular and religious programs sent Cleaver money to help with his defense.

A few things are clear. Many histories of Black Power and the Black Panthers detail Cleaver's life prior to and during his time with the Party, and some include his break with Newton during his exile. Hardly any of them mention his post-exile politics, and even fewer discuss his religion or his pants. He is similarly absent from histories of rise of American evangelical politics, aside from a swift mention or two. And any attempt to understand the connection between his newly conservative politics, his new faith, and those pants (and all the theories about black men's emasculation, the dangers of androgyny, and the benefits of erotic disclosure that Cleaver believed the pants represented) is entirely absent from the current literature.

I'm trying to figure this out. Wish me luck.

I am interested in what you find out. Was his conversion really real? Did his life really show that he was a true follower of Christianity? That's what i'm curious about.